Hottest Suburbs for Renters in the Dallas Area

There are areas of the country that are hotter than others when it comes to the real estate market for renters. Texas, especially the Dallas area, has some of the most popular up-and-coming suburbs for renters. These suburbs have been listed and ranked by RENTCafe. It’s important to note that the data is based off changes in the renter population from 2011 until 2016. Let’s see what they have to say!

The author of the article, Florentina Sarac, noted that living in the suburbs isn’t necessarily as exciting as living in a major city. Within suburbs, attractions are often spread of distances. In cities, however, so many things seem to be within walking distance or at least have close relative proximity.

That being said, people are flocking to suburbs. Why? Florentina writes, “Renting in the suburbs tends to be more affordable, generally, and who doesn’t like the idea of paying less for more space? In addition, suburban public schools are often better than inner city schools, and there’s no match for the sense of community, especially if you’re raising a family.”

RENTcafe listed 20 of the hottest suburbs people are moving to. Of the 20, Texas showed up on the list 5 times! Here they are:

It’s worth noting that 4 of the 5 suburbs in the Dallas area. Dallas is booming! Furthermore, to get more specific, Burleson is actually closer to Fort Worth. Still, the area is the current trendsetter for the state when it comes to the real estate market for renters.

Let’s take a closer look at each of these suburbs to get an idea of why they are so popular. 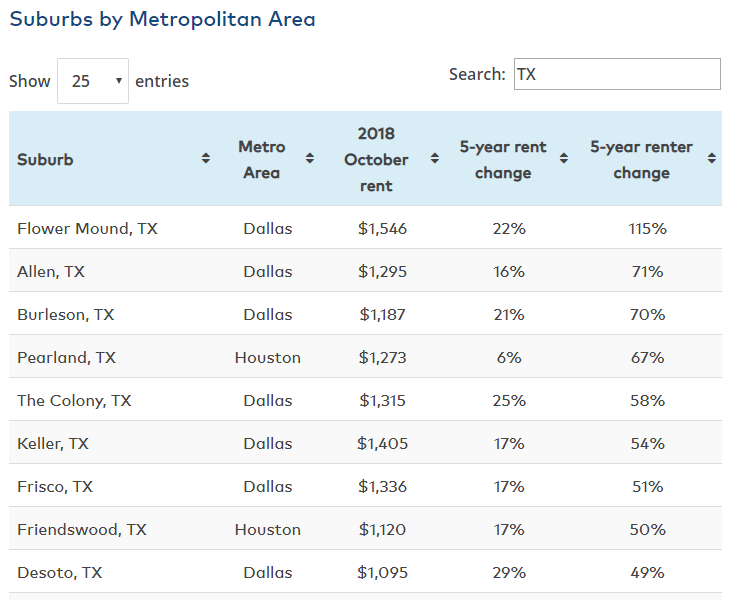 There’s more market growth in Texas! As you can see in the chart above, our top 5 suburbs—Flower Mound, Allen, Burleson, Pearland, The Colony—are already listed. In addition to those, RENTCafe listed even more of the trending cities in the state.

Coming in right after The Colony is Keller, TX, which saw a 54% increase in renters (compared to The Colony’s 58%). Then we have Frisco (51% increase), Friendswood (50% increase), and Desoto (49% increase). To view more trending cities, head over to RENTCafe.

Are you interested in moving to the Dallas area? Find the best Dallas Moving Companies!

Featured photo is a screenshot of RENTCafe by RPS Relocation